A judge whose demeanor on the bench has drawn reprimands drew challengers this month in her bid for reelection.

This judge hears misdemeanor criminal cases at the Frank Crowley Courts Building in Dallas. The race will come down to the Democratic primary election March 1. There are no Republican challengers for this race.

Mullin did not respond to interview requests.

“In Court 10, this is a court that I think the community needs a different option,” Wev said, declining to expand on Mullin’s performance. “I’ll focus on what I’m bringing to the table, that I’m the most qualified for this court in particular.”

Mullin has been on the bench since 2018. She was previously a misdemeanor judge and has been reprimanded by the State Commission on Judicial Conduct. The panel found that Mullin threatened to restrain a pregnant prosecutor; unnecessarily kept attorneys waiting for hours; required certain defendants to pay court costs before she would accept a plea deal, which is against the law; and refused to allow a defense attorney to appear in her courtroom because he was wearing shorts after knee surgery. 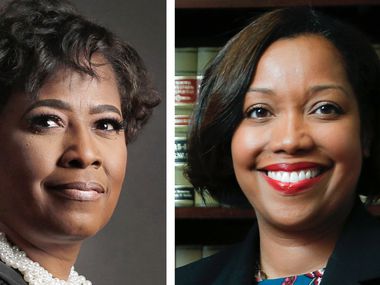 “Private attorneys tend to charge sometimes two or three times more than their normal rate just because the case is in that court,” she said.

Bracey Huff said she mostly stopped practicing in Mullin’s court last year after the judge required a client to go back to court multiple times — causing her client to miss work — without acting in most of the hearings and refused to pay Bracey Huff for the time she spent on the case.

Bracey Huff, who has worked in criminal defense for 13 years, said she has worked at domestic violence shelters, in family law and as a prosecutor and defense lawyer.

“I have a very holistic view on how domestic violence affects victims, the accused, their families and the community,” Bracey Huff said.

Wev said she has dedicated much of her career to domestic violence issues. She started as a public defender in Dallas County before going to the district attorney’s office, where she spent several years in the family violence division. The past two years, she has worked in the public integrity division, which handles officer-involved shootings, in-custody deaths and other misconduct of public officials.

Wev said a judge sets the tone and the way a judge treats victims and accused is “a big deal.” 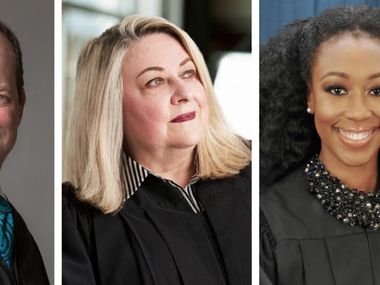 “Is a survivor going to feel comfortable coming into your court? Are you going to needlessly make them walk in front of your bench, 5 feet away from their abuser?,” Wev said. “It’s the little things and being trauma-informed and aware.”

Wev, who said she identifies as Latine and gay, said she would also bring representation to the bench of historically marginalized people that is currently lacking. Wev has spoken publicly about overcoming challenges she faces as a gay Latinx woman. She said she was one of only a few lawyers in the public defender’s office who were bilingual at the time. She was raised by her Latina mother and relatives who immigrated to Texas from Nuevo Laredo, Mexico.

“It was really impactful for me to be able to provide representation advocacy to people who look like the people I grew up with,” Wev said.

Of the 32 criminal court judges in the Frank Crowley Criminal Courts Building, only one, Hector Garza, is Latino. And only a few judges in the county are openly gay.

The deadline to register to vote is Jan. 31.

Mon Dec 27 , 2021
Expectation is growing that Donald Trump might face charges for trying to obstruct Congress from certifying Joe Biden’s election this year as a House panel collects more evidence into the 6 January attack on the Capitol, former prosecutors and other experts say. Speculation about possible charges against the former US […]