New York State Department of Environmental Conservation (DEC) Police Officers (ECOs) and Investigators enforce the 71 Chapters of NY Environmental Conservation Law (ECL), protecting fish and wildlife and preserving environmental quality across New York. In 1880, the first eight Game Protectors proudly began serving to protect the natural resources and people of New York State. In 2020, the 298 ECOs and Investigators across the state responded to 29,673 calls and worked on cases that resulted in 11,952 tickets or arrests for crimes ranging from deer poaching to solid waste dumping, illegal mining, the black market pet trade, and excessive emissions violations.

“DEC’s Environmental Conservation Police Officers are working hard in communities across New York to protect natural resources by upholding our state’s stringent laws and regulations and protecting public safety,” Commissioner Basil Seggos said. “Our ECOs are expertly trained to perform their duties in every setting-from cities to wilderness-and continue to adapt to meet new and emerging challenges as they build on their longstanding commitment to protect New York’s environment.”

If you witness an environmental crime or believe a violation of environmental law occurred, please call the DEC Division of Law Enforcement hotline at 1-844-DEC-ECOS (1-844-332-3267).

Five Loaded Firearms – Orange County
On Nov. 20, while patrolling known hunting areas in Orange County, Lt. Bello and ECO Carl encountered a group of hunters in the town of Hamptonburgh. As the Officers approached the hunting party, one individual seated on an ATV reached for the bolt of a rifle mounted on the gun rack. Another subject near the side door of his van, appeared to reach for a firearm. Both subjects were ordered to leave the guns as they were as three other members of the hunting party emerged from the woods. ECO Carl conducted a thorough search of the trucks, van, and ATVs on scene. A total of five firearms were loaded in or on the vehicles, three of which were owned by one individual. Tickets were issued to three members of the hunting party returnable to the Town of Hamptonburgh Court.

On the Line – Delaware County
On Nov. 24, ECO Parker responded to a report that a deer had been shot from the roadway in the town of Colchester. ECO Parker met with the caller who reported he was hunting when he saw an SUV drive along the roadway, fire a single shot, and drive off quickly. The complainant found an eight-point buck that had just been killed in the area of the shot, contacted law enforcement, and waited behind an abandoned house until he confronted the suspects when they returned. Upon arrival, ECO Parker interviewed the suspects and determined that the driver stepped just outside his car door and shot the deer from the roadway. ECO Parker seized the rifle used and found two additional rifles in the car, one of which was loaded. ECO Parker interviewed the passenger and determined he had attempted to assist the shooter in retrieving the deer. Officer Parker radioed for assistance and a K-9 deployment. The Town of Colchester Police Department arrived and assisted with securing the scene. A short time later, ECOs Wood and Bauer joined the responders. ECO Wood deployed K9 CJ and ECO Bauer deployed K9 Woods on scene for a spent shell casing detection. The driver was charged with multiple offenses, including possessing a loaded firearm in a motor vehicle, shooting from a public highway, illegally taking deer except as permitted, failure to tag deer, and several vehicle traffic law offenses. The passenger was charged as an accessory for assisting in the illegal take of the deer. All citations are returnable to the Town of Colchester Court.

No License, Over Bait – Oneida County
On Nov. 29, ECO Noyes received an anonymous tip about a large buck shot on a baited property in the town of Forestport. ECO Noyes responded to the property and found no one was home. The ECO observed a blood trail in the driveway leading to a barn and a fresh gut pile with salt lick, pumpkins, corn, and bait block scattered throughout the yard. Early the next morning, Officer Noyes went back to the residence and interviewed the couple living there. Faced with mounting evidence against them, the husband took Noyes to the barn and showed him a hanging 10-point buck. After questioning, the couple admitted they went hunting together on their baited property and the wife shot the 10-point buck using her husband’s buck tag since she had no hunting license. Officer Noyes seized the buck and issued summonses returnable to the Town of Forestport Court for several violations including illegal take of wildlife, hunting over bait, lending tags to another, failing to tag deer as required, placing salt licks on lands inhabited by deer, and hunting without a license. 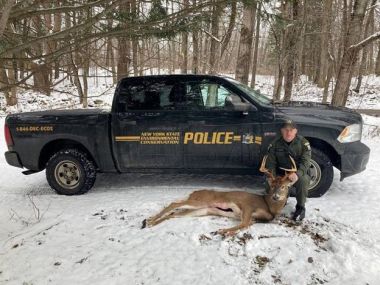 K9 ECO Assists in Two-County Car Chase – Genesee and Orleans Counties
On Dec. 1, ECO Fuerch received a complaint from a coyote hunter who had encountered a male subject carrying a shotgun and a backpack while trespassing on the property. The subject dropped the backpack and ran into the woods when the complainant confronted him, and the complainant retrieved the backpack, which contained deer antlers and deer calls. The complainant advised ECO Fuerch that he parks at the Stafford Highway Department and did not observe other vehicles in the area. While checking nearby storage units for possible vehicles, Officer Fuerch observed a vehicle parked partially in the roadway with its lights off. Suspecting the vehicle was there to pick up the subject who ran into the woods earlier, the ECO approached and turned on her emergency lights. The vehicle drove off, and Officer Fuerch radioed a Genesee County Sheriff’s Deputy. The Deputy successfully deployed spike strips on Route 237 near Route 33 toward Orleans County, causing operator to lose control of the vehicle after the tires on the runaway vehicle began to break apart. The vehicle came to a stop and two occupants fled on foot into the woods. A third occupant in the backseat was immediately taken into custody by the Sheriff’s Deputy. ECO Fuerch deployed K9 Hadley to track and locate the men who fled. The first subject as found, surrendered, and was taken into custody. The second subject was located in the garage of a nearby residence where he was taken into custody. The vehicle had switched plates and was reported stolen out of the city of Rochester. The vehicle occupants had several outstanding warrants and illegal drugs were found inside the stolen vehicle. The men are facing a host of charges, including criminal possession of stolen property and unlawfully fleeing police. This case is especially noteworthy as K9 Handley recently underwent lifesaving emergency surgery just two months ago (more info available on Facebook Watch (leaves DEC’s website)). 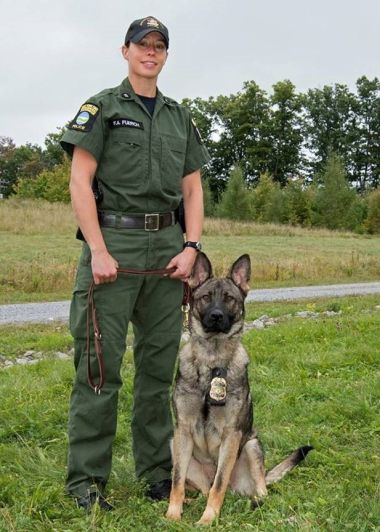 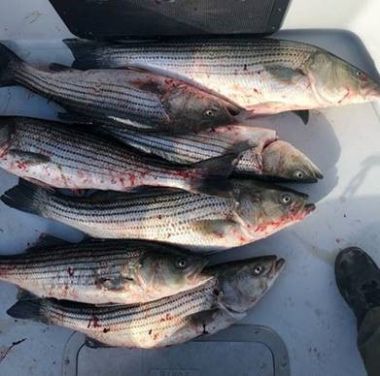 Waste Oil Tank Blow Out – Dutchess County
On Dec. 5, ECO Eyler responded to a report of a 275-gallon oil tank leaking into the street outside an automotive repair shop. When he arrived, ECO Eyler spoke with members of the city of Poughkeepsie Fire Department who indicated the shop owner was trying to force the oil out of a tank using an air compressor and a regular garden hose to transfer the oil into 55-gallon drums. Due to the immense pressure from the compressor, the oil blew out of the welded corner of the tank; none of it made it into the drums. The owner immediately called the fire department, located less than a half-block away. Once on scene, responders quickly stopped the spill and contained it. Fortunately, no petroleum products entered the waterways. A petroleum cleanup and recovery business will handle cleaning up the site under DEC oversight. In addition, DEC’s Petroleum Bulk Storage staff are assessing potential violations regarding the improper and undocumented storage of petroleum at this shop. 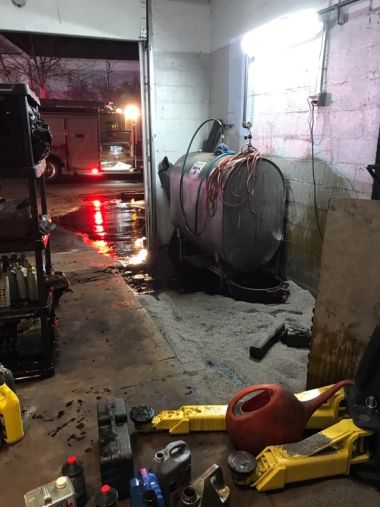 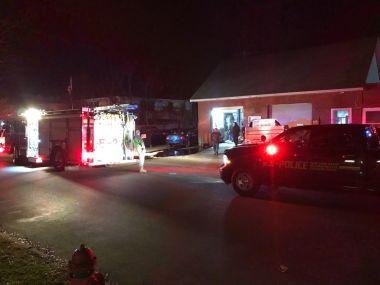