The funding is far from secured.

Just like four years ago, when Elon Musk famously claimed he had “funding secured” to delist electric car maker Tesla, the mercurial entrepreneur’s $43bn bid to take Twitter private will come down to whether he has the cash to carry out his plan and can coax the company’s board to go along with it.

Some analysts on Wall Street warned Musk’s $54.20 a share offer may not satisfy Twitter’s board — its stock traded above that level on most days last year. But assuming Musk is serious about pursuing his bid, Wall Street is watching closely to see how he could come up with the cash to make his Twitter takeover happen.

“The specifics of how Musk would finance the deal will determine the ramifications for Twitter,” said Neil Begley, an analyst at Moody’s.

Musk could finance the deal using his own wealth. The South Africa-born executive, who often laments being cash-poor, is worth more than $260bn on paper, according to Forbes. This includes his stakes in Tesla and SpaceX.

Rating agency Moody’s estimated on Thursday that Musk would need to cobble together $36bn, less than the $43bn headline valuation, accounting for the fact that he already holds a 9 per cent stake in Twitter as well as the company’s own share buybacks and extra cash it has generated since it last reported earnings.

The most straightforward way to get to that sum would be to sell down his shares in the companies he runs: Tesla and SpaceX. The downside, however, would be the hefty tax bill generated by those sales.

A more widely discussed alternative by bankers and private equity executives would be for Musk to pledge the shares he owns in Tesla as collateral in return for a multibillion-dollar loan.

The carmaker limits the size of loans senior leaders can take out by pledging their shares to 25 per cent of the value of an executive’s holdings. That limit is meant to reduce the risk that a margin call will prompt a big liquidation of Tesla stock.

Filings with US securities regulators show that Musk, who owns 172.6mn Tesla shares worth $170bn, had already pledged 88.3mn shares last June for loans. If Musk has not paid off those loans or received shares back from previous pledges, the company’s rules would limit another loan to about $21bn.

Securing those loans is another matter. The volatility of Tesla shares would test the resolve of many risk managers on Wall Street, as would Musk’s run-ins with the Securities and Exchange Commission.

Banks might be hesitant to work with the billionaire — including JPMorgan Chase, which sued Musk late last year for $162mn due to a fallout linked to the failed take-private of the carmaker in 2018.

“The noise of Elon Musk would be something we’d have to think about,” said one private lender. “There is a lot of volatility that comes with him.”

That has not deterred Morgan Stanley, which is advising Musk. Even though its balance sheet is smaller than rivals such as JPMorgan and Bank of America, it has tapped its relationship with Japan’s Mitsubishi UFJ to finance huge loans before, including $33.5bn for Bristol-Myers Squibb’s takeover of rival Celgene in 2019, one of the largest bridge loans on record.

Musk would not have to stump up the entirety of the multibillion-dollar cheque himself. Several private equity investors have expressed interest in backing him both with debt and equity. Advisers working with him have been hitting the phones trying to suss out who would line up, said one person with knowledge of the matter.

Buyout groups have been sitting on trillions of dollars, which makes financing the deal possible from a financial perspective.

“Putting aside the drama of it being Elon Musk and Twitter, the fact it’s plausible that private credit can do this is a statement about the massive transformation that’s taken place in capital markets,” said a senior executive at one direct lender.

A second executive at a buyout group said they expected private lenders would be more willing to fund the deal, because banks likely have less risk tolerance to finance a takeover of this size. Banks would also come up against limits set by US financial regulators.

“Twitter on a net income basis loses a lot of money. The [public] markets are only going to go so deep on it,” they said.

While Twitter reported losses over the past two years and carries junk credit ratings, it has more cash than debt on its balance sheet. That opens the door for Musk to raise billions of dollars in debt for his takeover, reducing the amount of Tesla stock he will have to sell or use for personal loans to fund the deal.

Twitter is expected to generate $1.4bn of earnings before interest, taxes, depreciation and amortisation this year. “If you think Twitter can be run far more efficiently, you can add back cost savings and get to a loan on an ebitda basis that makes sense,” the executive added. 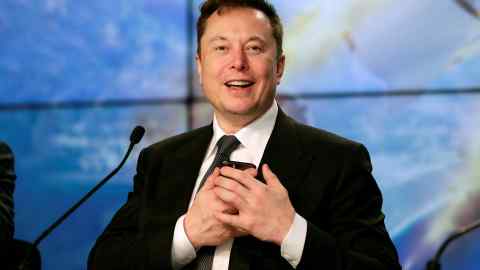 Those figures, thrown around in conversations and written down on notepads as investors attempted to get their heads round a buyout on Thursday, rely on Twitter meeting its growth targets. They also include one big assumption: that the cost of expanding data centres and spending on technology will not exceed an already-high $950mn projected by the company for 2022.

Buyout executives said they believed lenders would be willing to provide Musk — or another party bidding for Twitter — more than $10bn in debt, based on its earnings. Along with preferred stock, which pays a fixed dividend and would be senior to the common stock held by Musk, investors could provide a further $5bn or so, they believed.

That capital would stretch Twitter’s finances, especially if the senior debt costs the company 6 per cent or 7 per cent a year in interest. More junior preferred shares could pay a dividend of 9 to 12 per cent a year, according to estimates from one large lender who said they were willing to commit billions towards a potential deal.

“Capital markets would finance him if he puts up [the right] amount of equity,” said one senior credit investor. “He could easily get $10bn to $15bn of financing.”

Letter in response to this article:

If Musk has a moment to spare from Twitter bid . . .  / From Michael Lodge, Wiveliscombe, Somerset, UK