Describe the elements of the law prohibiting bribery of a foreign public official.

Section 70.2(1) of the Criminal Code (as currently in force) provides that the elements of the law prohibiting bribery of a foreign public official are:

If passed by parliament, the Crimes Legislation Amendment (Combatting Corporate Crime) Bill 2019 (Bill) will amend these elements slightly to provide that the person providing the benefit does so with the intention of ‘improperly influencing’ a foreign public official. ‘Improperly influencing’ is broadly and non-exhaustively defined in section 70.2A of the Bill.

Further, the Bill also seeks to introduce a new offence of ‘failing to prevent bribery of a foreign public official’, which is proposed to be section 70.5A of the Criminal Code.  Under that section, a company will be criminally liable where an ‘associate’ (which is broadly defined to include an officer, employee, contractor, agent or other service provider) bribes a foreign public official for the profit or gain of the company, unless the company can demonstrate that it had ‘adequate procedures’ in place to prevent the offence.

Definition of a foreign public official

How does your law define a foreign public official, and does that definition include employees of state-owned or state-controlled companies?

Section 70.1 of the Criminal Code defines ‘foreign public official’ broadly to include:

To what extent do your anti-bribery laws restrict providing foreign officials with gifts, travel expenses, meals or entertainment?

Australian legislation does not expressly refer to all the circumstances in which providing gifts, travel expenses, meals or entertainment may amount to bribery. Giving such benefits will be illegal only if it is done with the intention of influencing a public official. There are a number of guidelines which set out relevant standards, such as:

Further, the state and territory governments have their own public services with their own codes of conduct, which may be supplemented by agency-specific codes.

Do the laws and regulations permit facilitating or ‘grease’ payments to foreign officials?

Yes, section 70.4 of the Criminal Code provides that facilitating payments is a defence to being charged under Division 70, which is the bribery of foreign public officials.

Payments through intermediaries or third parties

In what circumstances do the laws prohibit payments through intermediaries or third parties to foreign public officials?

Can both individuals and companies be held liable for bribery of a foreign official?

To what extent do your foreign anti-bribery laws also prohibit private commercial bribery?

What defences and exemptions are available to those accused of foreign bribery violations?

What government agencies enforce the foreign bribery laws and regulations?

Australia has adopted a multi-agency approach to fighting corruption. In regard to bribery, Australia’s primary criminal law enforcement agencies are the Australian Federal Police (AFP) and the Commonwealth Director of Public Prosecutions (CDPP), which investigate and prosecute, respectively. At the state level, investigations are generally conducted by the fraud squad of the state police department. Prosecutions are then carried out by the relevant state director of public prosecution.

Other agencies that investigate corruption are the Australian Commissioner for Law Enforcement Integrity, the Australian Criminal Intelligence Commission, the Inspector General of Intelligence and Security and the Office of the Commonwealth Ombudsman. The CDPP is responsible for prosecuting offenders under the anti-bribery provisions of the Criminal Code.

Corruption within the public sector (including state and local government authorities, members of Parliament and members of the police force) is further dealt with at the state level through independent bodies such as:

While these bodies often cannot charge individuals, they have broad powers to investigate corrupt conduct. Reports from these investigations can then be passed to Parliament or the police, or released publicly.

Describe any recent shifts in the patterns of enforcement of the foreign bribery rules.

In December 2017, the Organisation for Economic Co-operation and Development (OECD) Working Group on Bribery identified that Australia had improved its enforcement of foreign bribery, with seven convictions in two cases and 19 ongoing investigations (see www.oecd.org/corruption/australia-takes-major-steps-to-combat-foreign-bribery-but-oecd-wants-to-see-more-enforcement.htm).

The Working Group’s report identified several achievements including strengthened whistle-blower protections in the public sector, amendments to the foreign bribery offence and the creation of new false accounting offences in the Criminal Code (Cth). In 2017, Australia also established the Fintel Alliance – a public-private partnership to support efforts to prevent money laundering, terrorist financing and organised crime.

Australia has introduced a number of reforms that will enhance the enforcement of the anti-bribery and corruption laws. These include increasing whistleblower protections (under the Treasury Laws Amendment (Enhancing Whistleblower Protections) Act 2019) and the introduction of a deferred prosecution agreement scheme. Proposed amendments to the Criminal Code to broaden the scope of the offence of bribery of a foreign public official are currently before Parliament (under the Crimes Legislation Amendment (Combatting Corporate Crime) Bill 2019).

In what circumstances can foreign companies be prosecuted for foreign bribery?

What are the sanctions for individuals and companies violating the foreign bribery rules?

An individual who commits an offence of foreign bribery contrary to section 70.2 of the Criminal Code may be subject to a sanction of imprisonment for a maximum term of 10 years, a fine of up to A$2.1 million, or both.

A corporation that commits an offence of foreign bribery contrary to section 70.2 of the Criminal Code may be subject to a fine of:

In addition to criminal penalties, any benefits obtained by foreign bribery may be forfeited to the Australian government under the Proceeds of Crime Act 2002 (Cth).

In 2009, the AFP commenced an investigation of two subsidiaries of the Reserve Bank of Australia, Securency International Pty Ltd (Securency) and Note Printing Australia Limited (NPA) following allegations that a number of employees and agents had paid bribes to secure banknote contracts in Malaysia, Indonesia and Vietnam.

Between 2012 and 2018, five individuals entered guilty pleas and were convicted on either foreign bribery or false accounting offences relating to the conspiracy to bribe foreign officials in Indonesia, Vietnam, Malaysia and Nepal (see www.afp.gov.au/sites/default/files/PDF/Reports/AnnualReport2018-19.pdf). The individuals were sentenced to terms of imprisonment ranging from three months to two years and six months.

On 8 November 2018, the High Court of Australia allowed appeals from the Victorian Court of Appeal and ordered that the prosecutions of four of the former senior managers of Securency and NPA for conspiracy to bribe foreign officials contrary to the Criminal Code and the Crimes Act 1958 (Vic) be permanently stayed (Strickland v Commonwealth Director of Public Prosecutions [2018] HCA 53).

The stay was granted on the basis that allowing the prosecutions to continue would bring the administration of justice into disrepute following  unlawful compulsory examinations conducted in the course of the AFP’s investigation by what is now the Australian Criminal Intelligence Commission (formerly the Australian Crime Commission (ACC)). The Court held that the ACC had not conducted a special investigation into matters the subject of the AFP investigation, but had instead provided a facility for the AFP to cross-examine the four individuals for the AFP’s investigative purposes.

In March 2019, Rosemary Rogers who was the former Chief of Staff at NAB (one of Australia’s largest banks) was charged with 56 counts of receiving corrupt benefits, including corruptly receiving benefits as an agent. The charges relate to a scheme by which the executive allegedly approved inflated invoices issued by an events company to the bank, in return for cash, travel and other benefits totalling A$5.4 million. Ms Rogers pleaded guilty to multiple charges and in January 2021, she was sentenced to a maximum of eight years imprisonment.

Sat Feb 19 , 2022
All-Terrain Vehicles may become street legal in Sitka after all. When the Sitka Assembly met on Tuesday (2-8-22), it approved on first reading new city code for ATV use on roads, just weeks after the Assembly opted out of a new state law allowing them.  The breakthrough came from the […] 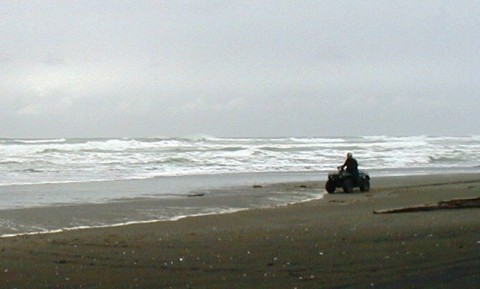