Unlawful termination of employment remains by far the most contentious issue in Indian labor laws. This is largely due to absence of the concept of an at-will employment system. In general, employment may be terminated only for reasonable cause or employee misconduct, subject to complying with necessary procedures.

If the employer has not complied with applicable law or contract while terminating employment, the employee has a right to challenge the termination order as per the processes set out under the applicable national or state laws. In the past, courts have passed orders of reinstatement along with back-wages and continuity of service, in cases where the employees were successful in proving that employment termination was unlawful or in cases of unfair labor practices. However, recently there has been a shift in the manner the courts have been adjudicating upon employment termination related matters.

Termination of employment of an employee is governed by both federal and state level labor laws. The Industrial Disputes Act, 1947 (IDA), inter alia contains provisions with respect to retrenchment, layoffs, unfair labour practices and closure of an establishment. The IDA defines “retrenchment” to mean the termination by the employer of the service of a workman for any reason whatsoever other than as a result of a punishment inflicted by way of disciplinary action. Retrenchment excludes:

The IDA applies only to individuals categorized as “workmen”[1], which excludes persons who are employed in a managerial or administrative capacity, or supervisors who draw a monthly salary exceeding INR 10,000 (approx. US$ 130).

Section 25F of the IDA provides three conditions which precedent to retrenchment of workmen who have completed continuous service of at least one year (240 days). The employer is required to:

Section 25N of the IDA requires the employer of a factory to obtain prior government permission for retrenchment. Section 25G of the IDA provides for the principle of last-in-first-out (LIFO) to be followed, wherein the employer shall ordinarily retrench the workman who was the last person to be employed in that category, unless for reasons to be recorded the employer retrenches any other workman. Besides the IDA, the Model Standing Orders under the Industrial Employment (Standing Orders) Act, 1946 also contain provisions on employment termination. Additionally, any termination provisions under the state-specific shops and establishments acts also need to be complied with by the employer[2]. Some of the new shops and establishments acts which have been based on the Model Shops and Establishment (Regulation of Employment and Conditions of Service) Bill, 2016 such as those for Maharashtra (Mumbai & Pune), Gujarat (Ahmedabad) and Uttarakhand (DehraDun), have done away with the employment termination provisions.

The employer is also required to ensure compliance with the terms on the individual employment contract and HR policies prior to terminating employment.

Previously, courts were of the view that if the employer terminates the service illegally and the termination is motivated, the termination may amount to unfair labor practice and in such circumstances, reinstatement being the normal rule, it should be followed with full back wages.[3]

The Supreme Court (SC) has recently adjudicated upon an issue of whether the termination of the respondent (employee) by the appellant (bank) was justified under the law.[4] The court opined that the employee is not entitled for reinstatement. It relied upon certain precedents to state that violation of Section 25F of the IDA does not automatically entail in reinstatement with back wages. Further, it added that “the relief to be granted depends on the facts of individual cases”. Instead of reinstatement, the SC awarded compensation of INR 5 lakhs to the employee.

The SC held in another significant case that “reinstatement cannot be automatic and if the transgression of Section 25F is established, then suitable compensation would be the appropriate remedy”.[5]In this case, the appellant was a daily wage employee in the Public Works Department (PWD) who had allegedly been terminated without following the due procedure laid down in Section 25F of the IDA. Further, unfair labor practice was claimed on the part of the employer since certain junior workers were retained while the appellant employee was terminated, although the appellant employee could not adduce convincing evidence to establish retention of junior workers. In such circumstances, the SC held that: “there may be cases where termination of a daily-wage worker is found to be illegal on the ground that it was resorted to as unfair labour practice or in violation of the principle of last come first go viz. while retrenching such a worker daily wage juniors to him were retained. There may also be a situation that persons junior to him were regularised under some policy but the workman concerned terminated. In such circumstances, the terminated worker should not be denied reinstatement unless there are some other weighty reasons for adopting the course of grant of compensation instead of reinstatement. In such cases, reinstatement should be the rule and only in exceptional cases for the reasons stated to be in writing, such a relief can be denied.”

The Supreme Court of India (SC) has recently held that “reinstatement with full back wages is not automatic in every case, where termination/dismissal is found to be not in accordance with procedure prescribed under law”.[6] In this case, the respondent was in effective service of the employer (bank) for six years until 1991 and had attained age of superannuation, so the court deemed it appropriate to award the employee a lump sum monetary compensation of INR 15 lakhs.

While the IR Code is not yet in effect, the provisions with respect to layoff and retrenchment have generally been retained. However, the IR Code has increased the applicability threshold for provisions relating to requirement of government permission for termination (retrenchment) of employment to 300 workers on an average per working day in the preceding 12 months. Additionally, in case of retrenchment of a worker, the employer will be required to deposit 15 days’ wages to the Worker Reskilling Fund to be set up by the government once the IR Code is made effective. Finally, penalty for non-compliance of the IR Code has been increased significantly, with the maximum amount being INR 2 million (approx. US$ 2,670).

Some of the recent case laws on employment termination demonstrate a critical shift in the judicial mindset on dealing with claims or unlawful termination or unfair labour practices on the part of employers. These developments are seen positively by employers, although they are advised to watch out for this space as the new labour codes unfold in India.

(s) “workman” means any person (including an apprentice) employed in any industry to do any manual, unskilled, skilled, technical, operational, clerical or supervisory work for hire or reward, whether the terms of employment be express or implied, and for the purposes of any proceeding under this Act in relation to an industrial dispute, includes any such person who has been dismissed, discharged or retrenched in connection with, or as a consequence of, that dispute, or whose dismissal, discharge or retrenchment has led to that dispute, but does not include any such person–

(ii) who is employed in the police service or as an officer or other employee of a prison; or

(iii) who is employed mainly in a managerial or administrative capacity; or

(iv) who, being employed in a supervisory capacity, draws wages exceeding ten thousand rupees per mensem or exercises, either by the nature of the duties attached to the office or by reason of the powers vested in him, functions mainly of a managerial nature.

[2] Certain states have provided exemptions to certain category of employees from the purview of the law or certain provisions of the law.

Tue Nov 30 , 2021
BRUNSWICK, Ga. — A jury on Tuesday began deliberating on the fate of the three white men accused of murdering Ahmaud Arbery after hearing the final, impassioned argument of the lead prosecutor, Linda Dunikoski, who pushed back against the defense’s contention that the men had the legal right to pursue […] 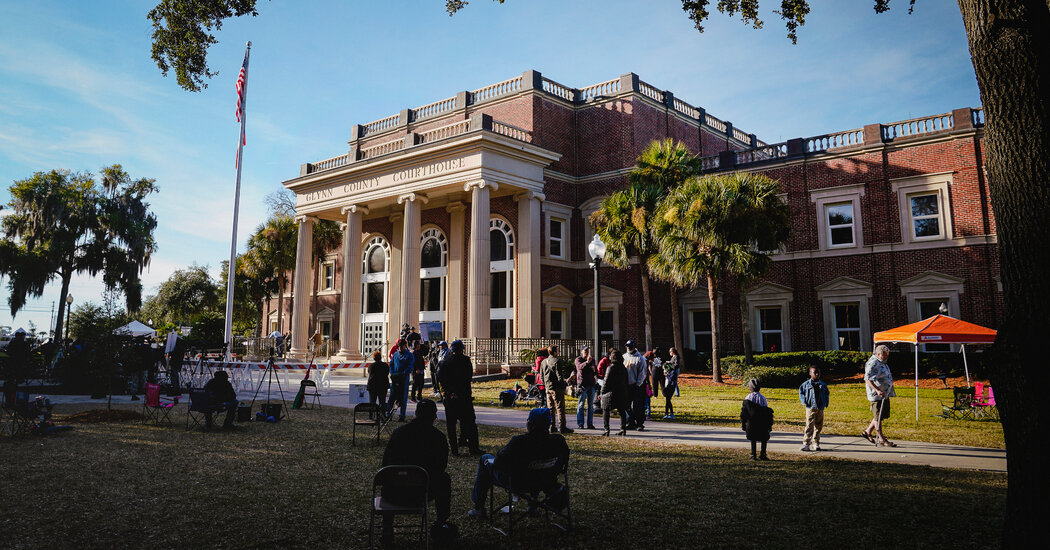