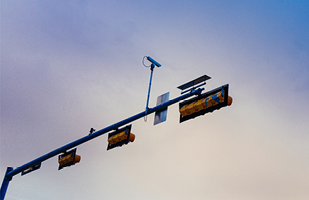 A law that reduces state funding to municipalities that use red-light and speeding photo enforcement is constitutional, the Supreme Court of Ohio ruled today.

The Supreme Court unanimously ruled that amendments to the state budget can “setoff” the amount of money raised by cities and villages using red-light camera programs. The Court also upheld a separate provision requiring the municipalities to pay an advance deposit to municipal courts when seeking to collect for photo-enforced tickets.

Writing for the Court, Justice Sharon L. Kennedy rejected claims by the village of Newburgh Heights and the city of East Cleveland that the changes infringe on their authority under the “home rule” provision of the state constitution. She wrote that “the Ohio Constitution does not require the General Assembly to appropriate any funds to municipalities,” and lawmakers have “exclusive discretion to reduce the appropriation of local-government funds” to municipalities collecting fines based on traffic camera operations.

The local government fund was established with the enactment of the state sales tax in 1935, and a designated portion of state revenues are distributed to county and local governments. Beginning in July 2019, municipalities must annually report to the state tax commissioner the total amount of fines collected from the use of traffic cameras in the preceding year. Under R.C. 5747.502(C), the commissioner uses the information to reduce the municipality’s share of local government funds. Under the “spending setoff,” the reduced share of a municipality’s funds is reallocated to the transportation district in which the municipality is situated for use on local transportation projects.

Lawmakers in recent years gave municipal and county courts exclusive jurisdiction over all civil cases concerning traffic-law violations, including citations issued by traffic cameras. Also beginning in 2019, municipalities filing civil actions to enforce unpaid citations from traffic cameras must pay advanced deposits to the court to cover the court costs for hearings regarding the fines unless a citation is for a violation occurring in a school zone.

Newburgh Heights sought an order from the Cuyahoga County Common Pleas Court to prevent the spending setoff and court “deposit requirement” from taking effect. East Cleveland joined the lawsuit. The municipalities argued that the requirements infringe on the home-rule powers granted to them under Article XVIII, Section 3 of the Ohio Constitution.

The Court’s opinion examined the provisions of the Ohio Constitution empowering state and local governments. Justice Kennedy noted that the constitution grants the General Assembly broad spending power of state funds, and only a few provisions restrict how tax dollars may be allocated. The opinion indicated that Article XII, Section 9, for example, requires 50% or more of the state income tax collected must be returned to the county or local government where the tax proceeds originated. Similarly, a constitutional amendment permitting casino gambling requires a certain percentage of casino taxes to be paid to counties, school districts, municipalities, and other local governments.

Beyond the specific limitations, the constitution does not create a general duty for the legislature to fund the operations of municipalities, the opinion explained.

Ohio voters adopted a home-rule amendment in 1912, which provides municipalities the power over all matters of local self-government, including the right to levy taxes and raise revenues through other sources, such as fines imposed by using traffic cameras.

Newburgh Heights and East Cleveland contended that home-rule powers prohibit the General Assembly from using its spending power to “punish” local governments for choosing to enforce traffic laws with cameras.

Local governments have the authority to enact laws that are not in conflict with the state’s general laws. The Court  then examined whether the spending setoff and the deposit requirement created any conflict between state and local law-making power.

The Court stated that the spending setoff reduces the amount of money collected by a municipality using traffic cameras, but it does not prohibit the local governments from enforcing traffic laws with cameras.

According to the opinion, the spending setoff “may disincentivize municipalities” from using traffic cameras, but it does not prohibit local governments from enacting or enforcing laws, and the statutes do not invalidate those laws, the opinion stated. There is no conflict between the state law implementing the spending setoff and the municipalities’ decision to operate traffic cameras,  the Court wrote.

State lawmakers are also empowered by the Ohio Constitution to create courts and specify their jurisdiction, the opinion explained. The deposit requirement ensures municipalities, just like private individuals, “shoulder the burden their litigation creates.” The deposit requirement may make enforcing camera-generated traffic tickets more expensive, but it does not prevent the municipalities from using cameras to enforce local laws, the Court stated.

“Therefore, the deposit requirement does not limit or otherwise infringe upon any municipal authority granted by the Home Rule Amendment,” the opinion stated.

The constitutional home rule power grants municipalities control over local matters, but it does not require the state to pay for it, the Court concluded.

PDF files may be viewed, printed, and searched using the free Acrobat® Reader
Acrobat Reader is a trademark of Adobe Systems Incorporated.