Skip to content
The price of Tesla’s most advanced suite of driver aids is about to go up. On January 17, the cost of the company’s “Full Self-Driving” option will jump from $10,000 to $12,000. It may also result in a bizarre first for the legal system. More on that in a moment.

Two Packages, One With an Escalating Price

Tesla offers two different driver assistance packages. The first, called Autopilot, is now standard equipment on every Tesla. It pairs traffic-monitoring cruise control with a lane-centering feature that will keep a car in a clearly-marked lane.

The second, called Full Self-Driving, adds features like one-touch automatic parking and a “summon” feature that will remotely pull the car out of a tight parking space. Tesla considers some of its features to be “in beta testing” but allows owners to use them on public roads after agreeing to certain waivers. With the features still in testing, the cars can read some road signs, slowing or accelerating in response, change lanes, and navigate highway ramps.

Related: Self-Driving Cars – Everything You Need to Know

The system has been controversial, in part because of its name and in part because of the strategy of allowing owners to use it as a form of testing. It has also been subject to an escalating series of price increases. As recently as 2018, it cost just $3,000 at vehicle purchase or $4,000 to add later.

Full Self-Driving is hardly the only Tesla product to see regular price increases. The company raised the prices of all of its products multiple times in 2021. Its best-selling Model Y saw at least eight price increases last year, while the Model S saw its base price jump by more than $25,000.

Driver Modes, One of Which Includes a Rolling Stop

The price bump isn’t the only change to Tesla’s system. Tesla regularly updates the software behind it. A recent update allowed owners to select three driving profiles that govern the system’s behavior – Chill, Average, and Assertive.

In Assertive mode, language in the update claims, the car will “have a smaller follow distance, perform more frequent speed and lane changes, will not exit passing lanes, and may perform rolling stops.”

A rolling stop occurs when a driver slows down but does not come to a complete halt for a stop sign. To be fair, most drivers perform them occasionally. But they are against the law. This marks the first time we’re aware of that an automaker’s driver assistance system has a setting for something that could earn its driver a ticket.

In an America where much of traffic law enforcement now falls to traffic cameras, it also means that, somewhere, soon, a robot will likely issue a ticket to a robot.

Sat Jan 15 , 2022
Mayor Eric Adams, in the wake of the deadly Bronx fire at a Mitchell-Lama apartment complex where residents have said there were persistent maintenance issues, told New Yorkers the key message he wants them to take from the tragedy is to “close the door.” The plea – one that’s been […] 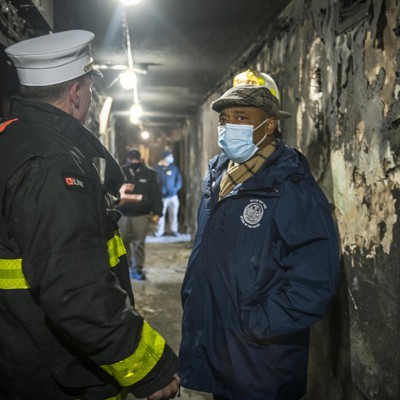