One would think that telepathy is a power confined to superheroes, but many Hollywood writers appear to possess this ability too. Somehow, through some supernatural confluence of human thought, dozens of screenwriters working over decades have come up with the same rules for the same superhero movies without ever communicating aloud to each other. These surprisingly political “laws” of superhero movies aren’t regarding heroes or villains, but the way that labor is depicted in these films. And these labor laws are both astonishingly consistent — from DC to Marvel to off-brand superhero franchises — and surprisingly right-wing. They’re also probably not what you think.

The obsession with superheroes … is near-religious in its fervor, and any perceived slight against the genre … results in days of collective, aggrieved fuming.

Maybe you’ve already dismissed me as a culture-war obsessed SJW for obsessing over the way labor is depicted in superhero movies. Indeed, on the surface, superhero movies barely seem to say anything about labor at all; after all, these movies are CGI slug-fests, not John Sayles slog-fests.

Yet as with any media as popular as these movies and shows are now, the parables communicated in superhero movies have become deeply embedded in the collective psyche. They are to American children in the 21st century what Grimm’s folk tales were to German children in the 18th century — moral allegories about what it means to be human, how to live a virtuous and noble life, and the proper role of the individual in society. From their youngest years, our children play with toy versions of Spider-Man and Captain Marvel as though they were tiny totems — which, in a way, they are. The obsession with superheroes, and the culture around the fanbase, is near-religious in its fervor, and any perceived slight against the genre from tastemakers results in days of collective, aggrieved fuming. That kind of vitriolic reactionary fanbase is too reminiscent of the Christian culture war for my comfort.

And just like the Christian Bible, which is full of rules about labor — including how quickly you should pay your workers — superhero movies have their own labor codes, though they’re never spoken aloud by any screenwriters or characters. Indeed, it seems like the unspoken commandment of labor in the superhero universe is that you don’t talk about labor in the superhero universe. But an unspoken rule is just as important as a spoken one; and that which is omitted is equally propagandistic as that which is overt.

Since superheroes have taken a consistent gritty and realist turn in the past two decades, let’s take that proposition to its logical conclusion and consider how “real” the depiction of labor is. When you look at the Batcave or Iron Man’s suit, at Kamar-Taj or Avengers Tower, you see massive, complicated works of architecture and machinery that require millions and millions of human hours of labor to maintain. But you don’t see a trace of those hands in these movies (with a few weird exceptions that we’ll get to). Rather, these things appear, fully formed, as though there was no contractor hired to build them; no penny-pinching construction manager trying to get away with using non-union labor; no overworked Chinese FoxConn worker soldering circuit boards.

This brings us to the formal declaration of the first labor law of superhero movies:

The superheroes do not use wage labor in the process of building their super-things.

The idea that labor works like this is pure libertarian propaganda.

They do everything themselves, or, occasionally, are aided by a selfless servant or partner. Even if they are engaged in child-rearing, the labor of childcare is seamless and beautiful, with none of the normal mess. Any other labor involved in the process of serving the super-beings is intentionally made invisible so as to hide the ethical quandaries it would create for these morally simplistic cinematic universes.

As for those helpers: These include characters like Bruce Wayne’s butler, Alfred, recently depicted in 2022’s “The Batman” as utterly devoted to their boss to the extent that his job was his entire and sole passion. Alfred doesn’t seem to have a life beyond serving Bruce; and while I’m sure that the retirement plan is good, he is not the kind of human that would exist in a non-superhero universe, where things like illness, monotonous routines, family, and a rewarding career trajectory make having a devoted lapdog a challenging prospect.

I don’t even need to tell you that the idea that labor works like this is pure libertarian propaganda. Just as Howard Roark’s skyscrapers sprang into existence solely because of his mighty, individualistic brain — the thousands of construction workers who actually built it were scarce in Ayn Rand’s novel — these super-objects come to be in the same manner, through invisible labor or labor executed solely by the hero. Tony Stark put together and maintained a whole suite of Iron Man suits without visible help from anyone besides a semi-sentient computer named Jarvis (who is essentially a digital version of Alfred); unlike the numerous service workers who keep most billionaire’s mansions from falling apart, his cavernous house was usually empty save for his ego and his inventions. Superman’s super-strength is a great kludge to eliminate the need to depict all the miners and plumbers it would take to carve out and maintain his Fortress of Solitude.

Like the spurious right-wing myth of the self-made man, these stories elide the universal need for help.

This is one of the very peculiar things about being “super,” I’ve noticed, is that superpeople need no help. They don’t have to deal with the messy realities of wage labor. Like the spurious right-wing myth of the self-made man, these stories elide the universal need for help. In that sense, by ignoring the primary cornerstone that affects most of our lives — most of us must spend 40-plus hours a week for 35-plus years toiling to enrich someone else — superheroes ignore a fundamental aspect of the human experience. Though these movies are tales about the human experience, the most fundamental part of life under capitalism is ignored and replaced with an escapist monomyth.

Want a daily wrap-up of all the news and commentary Salon has to offer? Subscribe to our morning newsletter, Crash Course.

That brings us to the second law of the superhero universes:

The superheroes must not use coercive or exploitative labor. 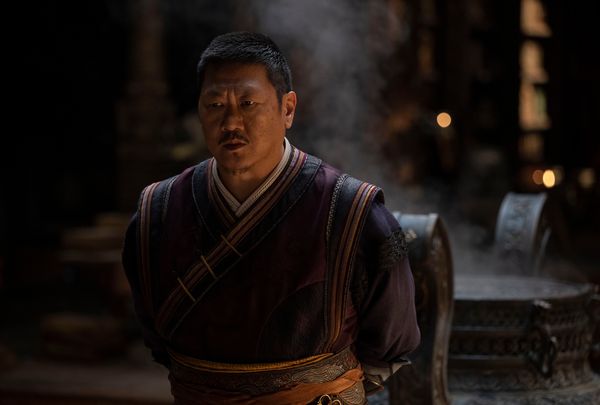 Benedict Wong in “Doctor Strange in the Multiverse of Madness” (Marvel Studios)No slavery (natch) or mind-control, nor even disgruntled workers clamoring for a union. There’s a scene in “Doctor Strange and the Multiverse of Madness” that shows a semi-repaired Kamar-Taj with scaffolding around it (implying labor at work!), the temple full of sorcerer journeymen selflessly training their magical powers for the venerable institution. Like Alfred, for the sorcerers employed at Kamar-Taj, their entire life is their work: they don’t seem to get paid, or if they do, they don’t complain about wages or work-life balance or lack of benefits. The temple’s magical reconstruction didn’t require any kind of exploitation or coercion, because labor in the super-universe isn’t really like normal labor.

But what about villains? Certainly, there are villains that enchant people to do their bidding, have disgruntled and/or underpaid staff, or even use slavery. That brings us to the third labor law of the superhero universes  — an equal and opposite to the first and second law. And it goes like this:

The villains alone are allowed to use coercive or exploitative labor.

And: the villains’ coerced labor force may, from the heroes’ perspective, be viewed not as humans but as pawns who can be dispatched without thought for the human lives behind them. Maybe you’re a starving single mom who took a job as a janitor at Lex Luthor’s LexCorp, just to put food on the table. You clock in and out and don’t pay much attention to the rumblings of the megalomaniacal CEO; after all, a job is a job, and most CEOs are megalomaniac these days.

But when the Justice League destroys your building and you die in a pile of rubble, your life won’t be counted among the casualties. After all, a bad guys’ evilness extends to his workforce — and they’re infinitely disposable, nameless faces to be punched, smashed, or vaporized.

Likewise, without giving anything away about the newly released movie, these two rules regarding coercive labor were also a major plot point in “Doctor Strange in the Multiverse of Madness,” in how they depicted the machinations between what makes Doctor Strange “good” and what makes Scarlet Witch “evil.”

The way labor is depicted in these movies is interesting because it’s unspoken — and whenever something is unspoken, that means that it is deeply rooted ideology.

Which brings us to the final law: All of a supervillain’s hired goons are considered to have the same totalizing physical and ideological dedication to their career, and as such:

The superheroes can dispatch the villainous labor force without hesitation nor regret. 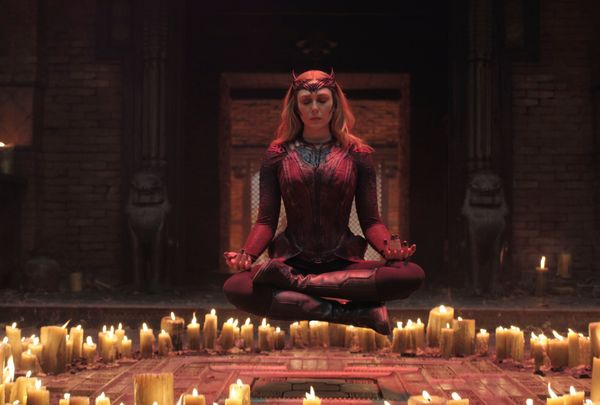 Elizabeth Olsen as Scarlet Witch in “Doctor Strange in the Multiverse of Madness” (Marvel Studios)Smash that hired goon’s face in, or toss the lackey off the moving vehicle; the signature on their paycheck attests to their complete dedication to the supervillain’s ideological project.

As much fun as it is to point out OSHA violations in the MCU, you might be asking what the larger point of this intellectual exercise actually is. First, the way labor is depicted in these movies is interesting because it’s unspoken — and whenever something is unspoken, that means that it is deeply rooted ideology, innate to the way that capitalism produces cultural products like movies.

And second, inasmuch as superhero movies are often propagandistic in other ways — whether for their depiction of neoliberal values systems or as overt Defense Department propaganda — the way labor is depicted in these movies isn’t something that we often talk about.

Goods do not emerge from thin air, nor do they emerge from selfless old butlers or ancient dwarf-gods.

Which is a shame, because this is propaganda that runs deep — and is enabled by a subterfuge occurring in these movies. The essential notion of superhero labor laws is this: that labor, done by anyone in these movies, is frictionless; that work and life are one. There is no direct “exploitation” happening on a real, apparent, material level; the conditions of workers’ exploitation are obfuscated. In other words, these films hide the truth at the heart of all labor: that all our buildings, cars, products, all the essence of life emerges from labor and exploitation. Goods do not emerge from thin air, nor do they emerge from selfless old butlers or ancient dwarf-gods. They come from humans with lives and families, sacrificing time that could be spent doing more productive things to make money for someone else and put a little food on the table.

Thus, the superhero world is a “post-labor” reality, one in which labor is no longer a factor that immiserates so many. And one of the ways that you can tell that there’s intention behind eliding depictions of labor is through the fact that there are many superhero parables that begin with poor superheroes, pre-superpower, working menial jobs: say, Spider-Man (an underpaid freelance photographer) or Deadpool (a disgraced ex-soldier) or Ant-Man (who has to resort to burglary for want of a job). For them, evolution into superherodom is an escape from the mundanity of wage labor, and provides them a means to leave “real” labor behind them. There’s something faintly sadistic about this trope, about imagining screenwriters rubbing the escapism in your face: Hey, do you hate your job? Well, you’ll never be a superhero, but at least you can escape into a world where labor doesn’t exist for a couple hours.

If these movies were any more “realistic,” the laborers tinkering in the background, serving the heroes’ food or sweeping their floors, would be the real heroes — without whom the Avengers skyscraper would collapse, the Batmobile engine would seize up, and the Fortress of Solitude would freeze solid.