To hear more audio stories from publications like The New York Times, download Audm for iPhone or Android.

Some jurors were stunned during deliberations in Bill Cosby’s 2018 trial on sexual assault charges when they asked the judge for the legal definition of consent.

He told them there was none under Pennsylvania law.

“He said you, as reasonable people, have to come up with your own definition,” said Cheryl Carmel, who was the jury forewoman.

Mr. Cosby had been charged with administering an intoxicant to a woman, Andrea Constand, and then penetrating her without her consent. Ms. Constand had come to his home outside Philadelphia and accepted wine and pills that she said she thought were herbal medicine.

Though Mr. Cosby described the sexual encounter in 2004 as consensual, Ms. Constand said she was too intoxicated to physically or verbally resist.

“Here was a sexual assault case and there was no definition,” Ms. Carmel recalled in a recent interview. “It just boggled my mind.”

Since the trial ended, Ms. Carmel has been working to address what she and many others view as a critical gap in the law, joining an effort to get Pennsylvania to define consent as an affirmative act, one that emphasizes that the absence of “no” does not constitute permission.

It is an unusual quest for a former juror, most of whom, researchers say, seldom engage in activism precipitated by their experience during a trial. But Ms. Carmel is determined.

“This is a problem throughout the United States, that this is not defined,” she said. “There has to be something that can be done to correct this, to ensure that future jurors can more efficiently do the job they need to do.”

Many states in America lack definitions of consent in their criminal laws governing sexual assault. Of those that do, some characterize consent as the absence of an objection — that if you didn’t somehow physically or verbally communicate “no,” and were not unconscious or otherwise incapacitated, then you consented.

Activists like Ms. Carmel believe that laws should require a “yes” signal to establish consent.

Efforts are now underway to add or refine a definition of consent in several states, such as New York, Vermont and Utah. They are an outgrowth, experts say, of a #MeToo era reckoning that has already led to initiatives — some more successful than others — to extend or eliminate statutes of limitations in sexual assault cases and to restrict nondisclosure agreements that can silence victims in sexual harassment lawsuits.

“We are in a moment of flux where we are seeing an effort to catch criminal law up to the current cultural understanding of consent,” said Deborah Tuerkheimer, a former prosecutor who teaches at Northwestern University and is an expert on laws regarding sexual assault.

Many of those advocating change say the laws should clearly define consent to mean a positive, unequivocal “yes,” an agreement that is indicated verbally or through some other action that is freely given and informed. By this definition, someone who assented to sex but was being coerced, or deceived, could not have actually consented.

The proposals roughly mirror regulations already in place in a small number of states like Wisconsin, and at many colleges, where consent in sexual encounters has long been a front-burner issue.

In New York, supporters of the change include Dawn Dunning, an actress who accused Harvey Weinstein at his trial of sexually assaulting her. Without a solid definition of consent, she said in an interview, “It’s just a gray area, which is the last thing you want when you are talking about sexual assault.”

In Utah, critics of the current law cite sections like one that says sexual assault is “without consent” when “the actor knows the victim is unconscious.”

Professor Paul Cassell, a law professor at the University of Utah and former federal judge, said the state’s language puts too much weight on proving that the defendant knew there was no consent. “What if a guy says, ‘It was 50:50, I was not sure,’” the professor asked. “In Utah that means you are not guilty of rape.”

Specifics vary from place to place, but only a handful of U.S. states now define consent as requiring an affirmative act — a freely given agreement in words or actions. As efforts to expand that number proceed, debates continue about how far the reach of the law should extend into sexual encounters.

While proponents of change applaud all efforts to further delineate consent, and eliminate confusion, others question whether it is practical to legislate that every step in a sexual encounter requires an affirmative yes, or to criminalize behaviors where miscommunications and simple misunderstandings, not aggression, are to blame.

“The language of sex is complicated,” said Abbe Smith, professor of law at Georgetown. “The criminal law is too blunt an instrument.”

Such concerns were raised during an unsuccessful effort to introduce affirmative language into the American Law Institute’s latest reworking of its model penal code, considered a blueprint for state laws.

In the Cosby case, the question of consent arose as the panel deliberated inside the Montgomery County courthouse, using a chart on an easel to record the main points of its discussion.

In a civil deposition, Mr. Cosby had said he had not asked for permission verbally when he put his hand on Ms. Constand’s midriff during their encounter at his home outside Philadelphia one evening in early 2004. “I don’t hear her say anything,” he said. “And I don’t feel her say anything. And so I continue and I go into the area that is somewhere between permission and rejection. I am not stopped.”

According to Ms. Constand’s testimony she was passive and, because of the intoxicants, unable to move, or fight him off, or even understand properly what was happening to her.

Some jurors, according to two who were present, wondered aloud whether, if Ms. Constand did not say no, did that constitute consent?

When the judge could not provide a legal definition, Ms. Carmel, 62, stepped forward as forewoman. She had a bit of background in the subject because she works in cybersecurity and privacy for an emergency notifications company. At the time, she was helping her company meet new European data protection regulations that require companies to obtain the positive consent of people visiting their websites before using their personal information.

She told her fellow jurors how the data protection rules say that consent must be freely given by a clear affirmative act, be specific, informed and unambiguous, and that it can be withdrawn.

“By providing that kind of framework it helped everybody get over the hump of ‘She didn’t say no,’ ” Ms. Carmel said. “It helped the conversation move on.”

Another former Cosby juror, Dianne Scelza, agreed. “It was important for us to come to some sort of understanding of what it meant and how it played into the verdict,” she said.

Mr. Cosby was convicted in 2018 after the jury decided that Ms. Constand had not consented to his actions. Earlier this year the Pennsylvania Supreme Court overturned the conviction, ruling that prosecutors had violated Mr. Cosby’s due process rights. He was released from prison in June.

After the trial, Ms. Carmel was approached by Joyce Short, founder of the Consent Awareness Network, who is trying to get affirmative definitions introduced into states’ laws. She had read about the problems the Cosby jury had with consent and Ms. Carmel’s approach as forewoman.

Since then, Ms. Carmel has met several times with local legislators, lobbying on behalf of a bill to define consent that activists plan to introduce into the Pennsylvania legislature.

“I recognized it was important to bring Cheryl to the meetings with the legislators because she could really explain,” said Ms. Short. “Their jaws dropped, literally.”

Senator Katie Muth, a rape survivor who is supporting the bill, said: “Having a definition in the law makes one less painful step if you do come forward.”

But even proponents of the legislation predict it will be difficult to win passage.

“This is going to be a really slow process because of the nuances,” said Jennifer Storm, a former victim advocate for the Commonwealth of Pennsylvania and author of several books on sexual assault. “It’s not that easy to define consent. It’s way too nuanced for that. Sex is nuanced.”

Ms. Carmel, though, said she is patient. After she retires next month, she said she hopes to devote more time to what she says has become her passion — refining the law in Pennsylvania and maybe in other states.

“How can we make it easier for people like me to be a juror, to listen to what a judge has to say, to listen to the evidence and come to a reasonable decision?” she said. “I want to make sure other jurors get all of the tools they could possibly use.”

The U.S. Has A Lot Of Guns Involved In Crimes But Very Little Data On Where They Came From

Tue Nov 9 , 2021
In August, police in Pennsylvania and New Jersey arrested three men they said were smuggling untraceable guns across state lines. Prosecutors have charged the men with several crimes related to a scheme in which they allegedly bought unfinished gun parts in Pennsylvania, assembled them into untraceable firearms with no serial […] 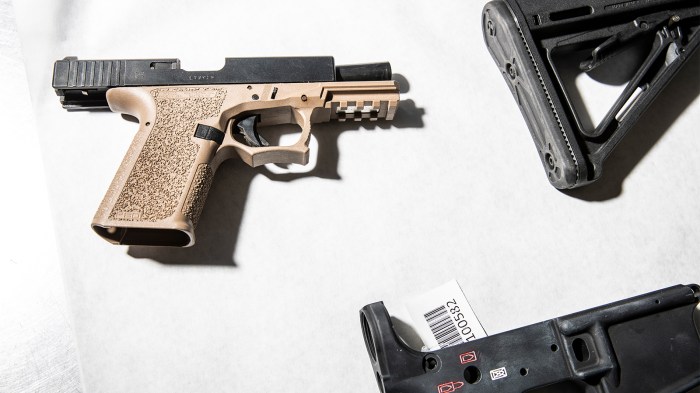