The war in Ukraine has turned very dark in ways few of us expected. Credible reports are pouring in of abuse of civilians, including torture, rape, looting, and executions (which Russia denies). Unlike many recent hostilities, the Russian invasion of Ukraine has been accompanied by Vladimir Putin’s official declaration of war, phrased in the language of a “special military operation”, but warlike in every aspect.

The international response has included a call from leading jurists, policymakers, and intellectuals to create a special tribunal to hold top figures in the Putin regime accountable for their crimes of aggression. However, even before the atrocities uncovered in Bucha and elsewhere, Karim Khan, chief prosecutor of the International Criminal Court (ICC), had opened a wide-ranging war crimes investigation. This was in response to a referral by 39 countries, including the United Kingdom. This will be the first time that such a judicial process has opened while the conflict concerned is still in progress.

The ICC, an international body permanently established in The Hague, Netherlands, was established in 1998 and began sittings in 2002. It replaced the ad hoc courts which tried the Second World War aggressors at Nuremberg and Tokyo, and more recent trials against the perpetrators of abuse in Rwanda and Bosnia. In recent years, a total of 46 people have been indicted by the ICC, including individuals from Uganda, Sudan, Kenya, Libya, Ivory Coast, and the Democratic Republic of Congo.

How is genocide proven in court?

Among the most difficult of charges to prove is ‘genocide’, which has two meanings. One, used by President Zelensky of Ukraine and multiple public figures, is a colloquial description of what is happening in Ukraine today. Politicians and writers have been stumbling over themselves to describe the many violent events in civilian areas of Ukraine as genocide.

However, there is also a precise legal definition, which requires proof of the kind that takes years to assemble and test in a court. Dr Iva Vukusic of Utrecht University, an expert on the warring militias of the former Yugoslavia, has observed: “The key thing that sets genocide apart from other international crimes is an intent to destroy, in whole or in part, one of four sectors of a population, whether national, ethnic, racial or religious groups.”

The testimony of the victims is not sufficient. A paper trail, voice recordings or similar, are needed to prove that there is a premeditated intention to exterminate a particular group within the wider population. It is “one of the international crimes that has the highest intent threshold,” according to Yasmine Ahmed, UK director of the charity Human Rights Watch (HRW). That is why it is so hard to prove.

The architect of the term, codified as an international crime by the General Assembly of the United Nations in 1948, was Raphael Lemkin (1900–59). He devised the word from genos (Greek: γένος génos, ‘family, clan, tribe, race, stock, kin’) and -cide (Latin: -cīdium, ‘killing’). A polyglot who spoke nine languages, Lemkin was born in what is now modern Belarus and studied at Lviv (then called Lwów) and Heidelberg universities, specialising in international law and foreign languages respectively. Significantly, a posthumous paper of his – Soviet genocide in Ukraine, published posthumously in 2014 – was banned by the Russian Federation as an “extremist publication” the following year.

Another student of the international law faculty at Lwów (then called Lemberg, as part of Austria-Hungary), was Hersch Lauterpacht (1897–1960). It was he who inserted the indictment of “crimes against humanity” – murderous acts by a state against individuals, often its own citizens – into the 1945–46 Nuremberg trials. He helped draft many of the speeches of Sir Hartley Shawcross, the chief British prosecutor. These relate to events both in war and peacetime that, as part of a widespread systematic policy by a state, cause large-scale human suffering or death to a civilian population. Unlike war crimes, which can be committed by individuals, crimes against humanity are generally committed by a national organisation, like an army or a police force.

How are war crimes defined?

A third category of indictments that might be applied to Russian activities in Ukraine are ‘war crimes’. These are activities committed specifically against the series of international treaties and declarations that govern the way war is fought. They were adopted at international peace conferences in 1899, 1907, and 1954, held at the Hague, and became known as the Hague Conventions. They relate solely to acts committed by individuals in war and cover a range of atrocities, including killing civilians or prisoners of war, unnecessarily destroying civilian property, and sexual violence. The 1954 convention relates to the protection of cultural property in armed conflict.

War crimes are perhaps the easiest to define, as they run counter to the Hague Conventions just described. Such crimes also contravene the four Conventions and three additional Protocols which complement them, ratified at Geneva at different times, known collectively as the Law of Armed Conflict.

The first Geneva Convention was initiated in 1864 by what is now the International Committee for the Red Cross and Red Crescent (ICRC) and today they provide minimum standards of humane treatment and protection to war’s victims. They cover civilians, prisoners of war (POWs), and soldiers who are wounded or otherwise incapable of fighting. Although being charged with either of the above categories, international lawyers observe a sense that the headline-grabbing charge of genocide is ‘the crime of crimes’, though not set in any law as such.

Thus, when President Zelensky accuses Russia of committing a genocide in his country, he might technically be referring to war crimes, and even crimes against humanity, which nevertheless fall short of legal genocide. This is why, when British prime minister Boris Johnson recently stated that the events in Bucha “do not look far short of genocide,” a Downing Street spokesperson then clarified that “the determination of genocide should rightly be made by a competent court, rather than by the UK government”.

And although initially cautious, US President Joe Biden on 12 April accused Russian forces of committing acts of genocide in Ukraine. He told journalists: “Yes, I called it genocide because it’s become clearer and clearer that Putin is just trying to wipe out the idea of even being Ukrainian.”

There is no reason to think that the Russian politicians and military figures behind the awful events unfolding on a daily basis will not, one day, be brought to justice

When it comes to bringing individuals to trial, with all the difficulties that might ensue in finding and removing someone from the Russian Federation, it is worth remembering that individuals can be tried in absentia. This means they are physically absent during the proceedings. International jurists generally recognise such a situation if the accused is aware of the trial, is in hiding abroad, or if an attorney is assigned to represent them.

Martin Bormann, a Nazi official and Hitler’s private secretary, was tried in absentia and convicted of war crimes and crimes against humanity at the Nuremberg trial of 1946. Changes of government and political will were also responsible for bringing the former Serbian president, Slobodan Milošević (who died during his trial); Bosnian Serb Army chief, General Ratko Mladić; and leader of the Bosnian Serbs, Radovan Karadžić, before the International Criminal Tribunal for the former Yugoslavia (ICTY). When their crimes were committed, there seemed little likelihood of them ever being brought to justice. Eventually, of 161 indicted individuals from that war, 91 were sentenced.

Another option is internal investigations by the Ukrainian national judiciary, who at the time of writing have opened cases on 4,820 incidents of alleged war crimes by Russian forces in the country. By tradition, states have no authority to prosecute sitting heads of state, whereas the ICC can. This is why, even if the possibility seems remote at present, there is no reason to think that the Russian politicians and military figures behind the awful events unfolding on a daily basis will not, one day, be brought to justice.

Peter Caddick-Adams is a writer and broadcaster who specialises in military history, defence and security issues. He lectures at universities, military academies and staff colleges around the world and spent 35 years as an officer in the UK Regular and Reserve Forces. His next book, 1945: Victory in the West, is due to be published by Penguin in May 2022 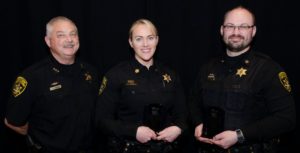