Ukraine is calling for an investigation into potential war crimes committed by Russia during its invasion.

The UN Human Rights Council has voted to accept Ukraine’s request to hold an urgent debate on Thursday, where a draft resolution will be considered.

If it is adopted, a commission of three independent experts will investigate all alleged violations of international law in Crimea and the Donetsk and Luhansk regions since 2014, as well as all of Russia’s actions since invading last week.

Russia has been accused of shelling an orphanage and kindergarten, as well as using vacuum bombs.

Ukraine’s Minister of Foreign Affairs, Dmytro Kuleba, said on Twitter that Moscow had committed war crimes and that evidence was being collected for a trial at The Hague.

What are war crimes?

War crimes are defined by the UN, developed at the Geneva Conventions.

The Geneva Conventions are four treaties, and three additional protocols, that establish international legal standards for humanitarian treatment in war.

The 1949 Geneva Convention, negotiated after the Second World War, defines the basic rights of wartime prisoners, establishes protections for people who are wounded and for civilians in and around a warzone.

The definition of war crimes itself is long, and includes details including types of weaponry that are banned, to the targeting of certain buildings, such as hospitals and those dedicated to religion, education, art, science or charitable purposes.

It bans actions that cause deliberate suffering, such as torture, as well as “intentionally directing attacks against the civilian population as such or against individual civilians not taking direct part in hostilities”.

You can find the UN’s full definition of war crimes here.

What is Russia accused of?

Ukraine has accused Russia of war crimes over the bombardment of civilian areas in Kharkiv.

During a visit to Warsaw, Prime Minister Boris Johnson said Russian President Vladimir Putin had decided to “bomb tower blocks, to send missiles into tower blocks, to kill children, as we are seeing in increasing numbers”.

The chief prosecutor of the International Criminal Court, Karim Khan, said he plans to open an investigation “as rapidly as possible” into possible war crimes and crimes against humanity in Ukraine.

“I have been closely following recent developments in and around Ukraine with increasing concern,” Mr Khan added. “I remind all sides conducting hostilities on the territory of Ukraine that my office may exercise its jurisdiction and investigate any act of genocide, crime against humanity or war crime committed within Ukraine.”

UK Deputy Prime Minister Dominic Raab, a former Foreign Office lawyer, said it must be clear “both to Putin but also to commanders in Moscow and on the ground in Ukraine that they will be held accountable for any violations of the laws of war”.

He told Sky News: “Those that engage in war crimes will be held to account.”

The Ukrainian ambassador to the United States has accused Russia of using a vacuum bomb during its ongoing attacks.

Oksana Markarova was speaking reporters during a meeting with White House lawmakers, at which aid for Ukraine was discussed.

“They used the vacuum bomb today, which is actually prohibited by the Geneva convention,” she said. She did not say where it was used.

White House Press Secretary Jen Psaki said she had seen reports that Russia had used a vacuum bomb, but could not confirm it was the case.

“If that were true, it would potentially be a war crime,” she told a press briefing.

Thu Mar 3 , 2022
Pakistani media stakeholders have widely condemned the presidential ordinance amending the Prevention of Electronic Crimes Act (PECA) laws, which they claim will stifle the flow of information in the country and limit free, independent, and responsible media. The International Federation of Journalists (IFJ) and its Pakistan affiliate, the Pakistan Federal […] 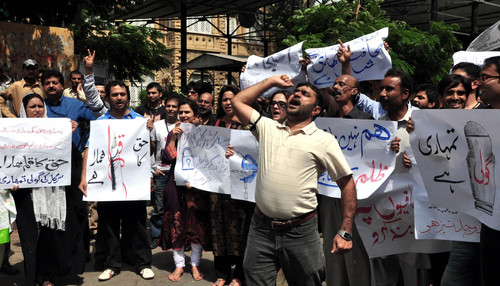